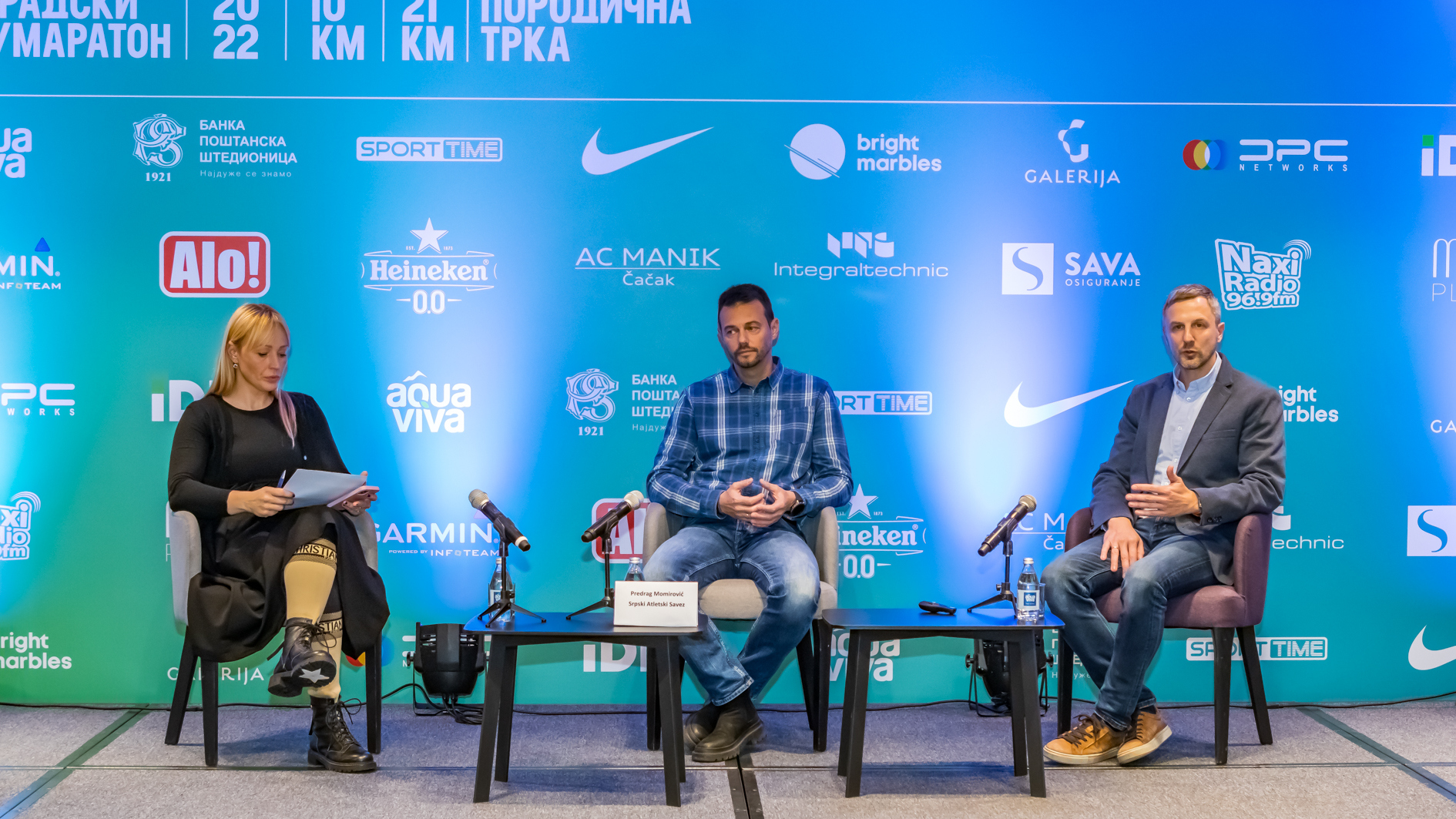 The Belgrade Marathon, as the organizer of the biggest sporting event in our country that inspires thousands of people to run, took an active part in educating society about all aspects of healthy habits, the importance of physical activity for mental and physical health, but also educating high school students and students about all aspects of the organization of major sports events from the point of view of eminent interlocutors from the world of sports and large corporations.

On this occasion, the first educational conference called the Belgrade Marathon – Sports Forum was held yesterday in the Mona Plaza Hotel, where three panels were held: Organization of large sports and athletic events, PR and communication in sports, and Health and sports. The audience consisted of students from the Faculty of Sports Union and the College of Sports and Health and students of the Prestige Sports High School.

At the very beginning, the opening speech was given by the director of the Belgrade Marathon, Darko Habuš, who thanked the students for showing interest in the Sports Forum and announced the interesting lecturers and the reasons why he believes that such panels are important to encourage the younger generations to understand that in sports and to the organization of major sports events, knowledge comes through volunteerism and experience, and invited them to join the Belgrade Marathon team, which is always open to new generations of young people.

The director of the World Indoor Athletics Championship held this year and the manager of the Serbian Athletics Federation, Predrag Momirović, spoke at the first panel entitled “Organization of major athletic and sports events”. In the past 10 years since he joined the Serbian Athletics Federation, Momirović has participated in the organization of a very large number of athletics competitions from the most responsible positions, primarily the European Cross Country Championship in 2013, the European Indoor Championship in 2017 and the World Indoor Championship in 2022. . years. The young people had the opportunity to hear the rich experience of Momirović, the challenges he faced, but also to conclude that improvisation and the team are the most important if you want to work as an organizer of major sports events. Also, before the Serbian Athletics Federation, Momirović worked for many years in the Belgrade Marathon as a technical director, so he talked about the extent to which that experience helped him to progress in his work and to gain the experience necessary for organizing major world athletics competitions.

The guests on the second panel were two ladies with whom we spoke on the topic of PR and communication in sports. One of these ladies, Jelena Mitrović, representative of the company Mercator S, which has been with the Belgrade Marathon for a decade, was an excellent interlocutor on the subject of PR from the point of view of sponsors and patrons of major events. Jelena Mitrović spoke about the reasons why the company Merkator S decided to cooperate with the Belgrade Marathon for 9 years, we heard how they prepare for the most creative campaigns and inspirational messages, as well as how long they prepare for our most massive event in the country. The second lady, one of the few women in sports journalism, is the editor and presenter on TV Prva, Nina Kolundžija. Even as a child, Nina dreamed of being involved in sports. Considering the lack of talent to deal with the same, she decided to become a sports journalist. She came to the B92 sports newsroom because she thought she would learn the most from the best, which turned out to be true. At first she worked on the website, and then she switched to television. She is the first lady who became a presenter, and later an editor of sports news and reviews on television B92. We found out how much she enjoys her job and what it’s like to be a privileged lady in a “male” profession.

The third and last panel of yesterday’s educational conference was dedicated to the topic of Health and Sport. Whether sport and health go hand in hand was revealed to us by Ljubica Papić, with whom we spoke on the topic of “Long-distance running pace strategy” and Dr. Daniel Pešić, who spoke to us about adaptation in exertion at different ambient temperatures and air pollution. a topic that is very popular these days in our capital. Dr. Daniel Pešić is a sports medicine specialist, head of the cabinet for sports medicine at the Military Medical Academy and a member of the medical committee of the Belgrade Marathon, and Ljubica Papić is a doctoral student at the University of Belgrade – Faculty of Sports and Physical Education.

The Belgrade Marathon – Sports Forum is only the first educational conference that will become a practice in the future, and the Belgrade Marathon is the initiator and driver of changes in the sports industry in the coming period. We use this opportunity to thank all the speakers, guests, students and pupils, and expect even more quality educational content from us in the future, because we can “Always More!”