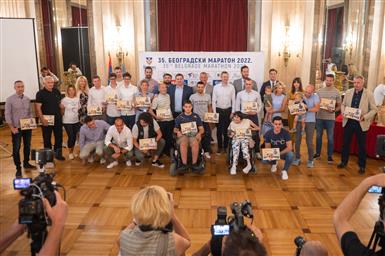 At a ceremony in the Old Palace today, special awards were given to “Heroes of the 35th Belgrade Marathon”, institutions and individuals who made a great contribution and pushed their own boundaries at the recently held 35th Marathon. Belgrade Marathon.

The director of the Belgrade Marathon, Darko Habush, said that the heroes of the marathon showed that seemingly impossible chances are possible, like, as he stated, several dozen people with disabilities who participated in the marathon.

“We know how difficult it is to prepare for a marathon and half-marathon, which carry a special emotion, a charm. However, there are also those individuals who are ready to sacrifice themselves and their results in order to help someone else, for the sake of a higher goal. The Hero of the Belgrade Marathon was created precisely in order for us as a society to recognize and reward individuals who are examples of philanthropy and solidarity through their actions, and who have done much more than run a marathon. They contributed to the fact that someone who would otherwise not be able to do it on his own, finished the marathon with their help. They showed that absolutely everything is possible with desire and will and a kind of effort in order to achieve a certain goal. All of them together are here today and they are Heroes 35. Belgrade Marathon.”

The President of the Belgrade City Assembly, Nikola Nikodijević, said that the Belgrade Marathon is the most massive and one of the most important sports manifestations in Belgrade, and expressed his belief that the long-term cooperation between the City and the organizers will continue.

“Today, the Belgrade Marathon is at least a racing event. It is primarily a social event, in which the largest number of participants are recreationists who want to set new limits for themselves,” said Nikodijević.

He said that he believes that the Belgrade Marathon will serve to popularize sports and that, he points out, it will continue to be built as one of the symbols of the capital.

Among the winners are people with disabilities, but also volunteers – their helpers, running organizations, institutions, among them the oldest participant who is 88 years old, as well as the parents of the twins who ran the half marathon.

The Ministry of Labour, the Serbian Athletics Federation, the Tourist Organization of Belgrade and some companies received a certificate of appreciation for their special contribution to the Belgrade Marathon.

On behalf of the city of Belgrade, the President of the City Assembly, Nikola Nikodijević, received the award, and on behalf of the Ministry of Sports and Youth, Minister Vanja Udovicic.

The Belgrade Marathon was held on the 15th. May on the streets of the capital and gathered more than 6,700 participants from all over the world.

Responsible social business has been part of the business policy of the Belgrade Marathon for many years, in the spheres of relations with the social community, conducting humanitarian campaigns, promoting the importance of aid and giving gifts to individuals or groups in need.

Heroes of the Belgrade Marathon are organized in cooperation with the Sports Association of Persons with Disabilities, under the auspices of the Ministry of Labour, Employment, Veterans and Social Affairs.