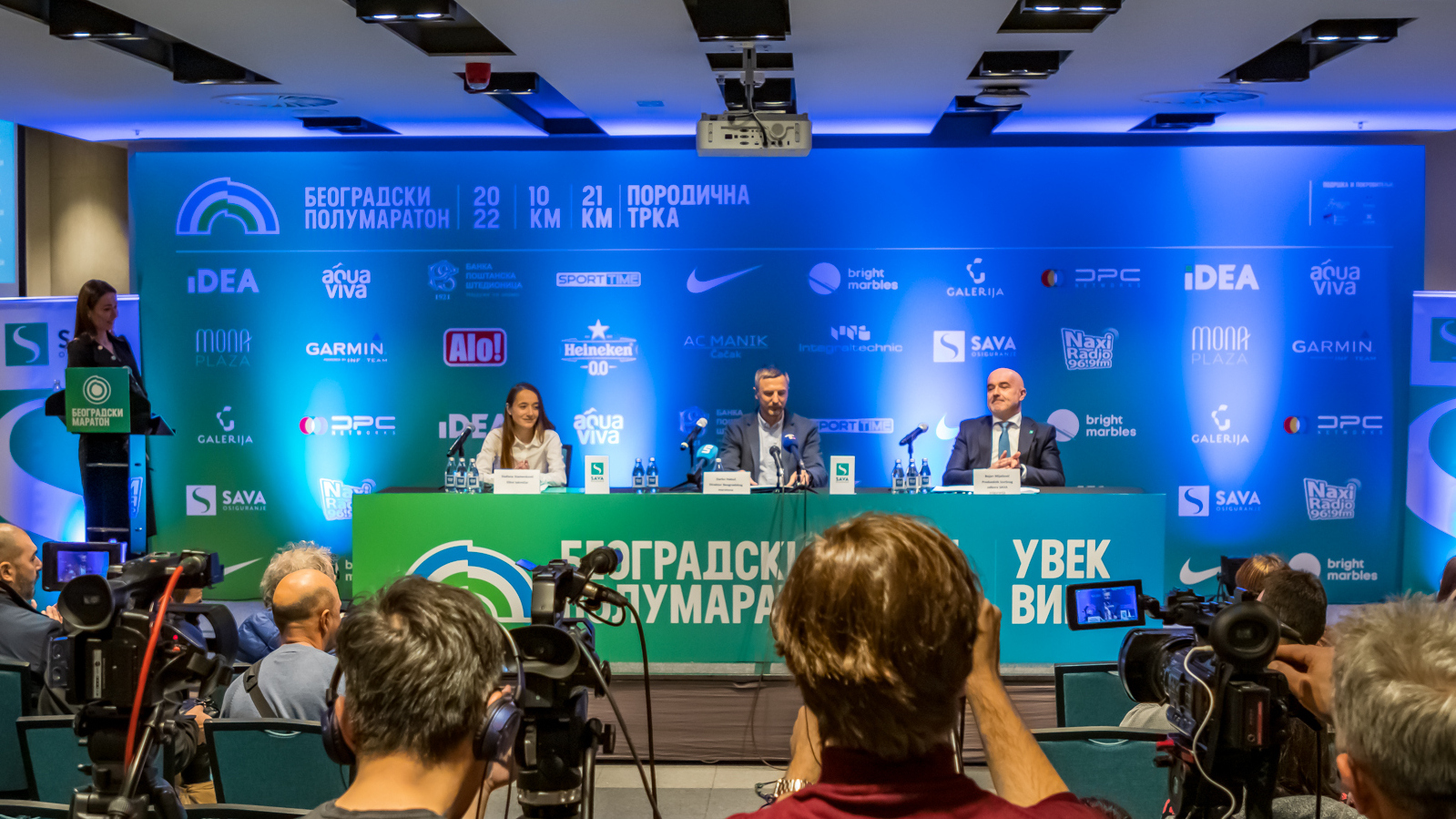 See you 3. A press conference was held at the Autumn Belgrade Half Marathon, where it was announced that the last three races of this season organized by the Belgrade Marathon will be held, namely: the 21 and 10 km races and the Sava osiguranje family race of 2.3 km. At the conference, the director of the Belgrade Marathon, Darko Habuš, the president of the executive board of Sava Insurance, Bojan Mijailović, and the representative of elite competitors of the younger generation, Slađana Stamenković, addressed the gathered media.

“On Sunday, the third Autumn Belgrade half-marathon awaits us, which is a real opportunity to finish the season together before the winter break that certainly awaits us.” Unlike the half-marathon distance in the spring, the route of the autumn half-marathon is run through the central city streets, we start at the church of St. Mark, pass through Dorćol, run around Kalemegdan and over the Branko bridge and enjoy the autumn atmosphere of our capital. We thought of all categories of participants and organized three races. A 21km race for elite and prepared participants, a 10km race for recreational runners and Sava osiguranje, a 2.3km long family race to which we invite all families who want to run or walk a circle with their children from the church of Saint Mark through Slavija to Terazi, and from an early age they create a love for sports and healthy habits in children,” said Darko Habuš, director of the Belgrade Marathon, and added: “Participation in the 3rd Numerous international and domestic elite competitors have already confirmed the autumn Belgrade Half Marathon, so strong competition and an extremely fast race are expected, with the possibility of breaking the course record. In the strong men’s competition, three runners from Kenya will compete with a runner from Burundi. We expect course records to be broken, as all four have personal bests in the half marathon that are under 62 minutes. In the women’s competition, Lena Jerotic from Kenya will compete with local competitors Olivera Jevtić and Teodora Simović. Guests 3. The fall Belgrade Half Marathon will also feature Serbian marathoners who participated in all 6 marathons from the “Majors” series, namely Katarina Pohlod, Aleksandar Kapulica and Mašan Pejović who will run, and Vladimir Beljanski, Srećko Mićić and Vučić Šćepanović who will cheer them on from the audience.”

“After many years of high-quality cooperation with the Serbian Athletics Federation, we have decided to support the development of athletics – the queen of sports – and to promote a healthy and active lifestyle even more intensively. Sava Insurance Group today signed an agreement on the sponsorship of the Belgrade Marathon for the next three years, making Sava Insurance officially an active member of the Belgrade Marathon Club. We expect quality cooperation for mutual satisfaction. From our side, the Belgrade Marathon and the participants of all races will receive adequate insurance for the duration of their participation in the races. said Bojan Mijailović, president of the executive board of Sava osiguranje and added: “With the support of the Belgrade Marathon and the Serbian Athletics Association, we are organizing the Sava osiguranje family race, which takes place on the same day as the Belgrade Half Marathon, on the 27th. November 2022 year, starting at 10:15 a.m. at the church of St. Mark. Sava osiguranje is a family race with a show and fun character. It represents a festival of active families celebrating life through spending quality time together. Families that are physically active together are better connected and build stronger bonds with each other. The race is free, and 1,000 registered participants receive starting packages from Sava osiguranje. We invite our fellow citizens to participate in the Sava Insurance family race and to walk or run the 2.3 km course with their families, where interesting surprises await them, and valuable prizes based on interesting criteria at the finish line.”

Slađana Stamenković, a representative of elite female competitors of the younger generation, said on that occasion: “The Belgrade Marathon is probably the reason why a large number of people in Serbia started running, for me it was the motivation for setting personal records, even though the course is considered more difficult. The advice for runners on Sunday is to take advantage of the good weather conditions to get a good result and lay the foundation for next year. I would invite fellow citizens to cheer on Sunday and to build a sports atmosphere in Belgrade together.”

The press conference was also attended by Viktorija and Natalija Preočanin Samardžić, the initiators of the race for Dragoljub Đuričić, who announced that they will be part of the Sava osiguranje family race, and that so far they have attracted a large number of people who will run and walk on Sunday wearing t-shirts with Dragoljub’s image and so keep his memory alive. “After so much love that he poured into every Belgrade Marathon, Dragoljub’s movement is getting bigger every day and we are very proud of that,” Natalija Preočanin Samardžić concluded.

After the media conference, an educational conference was held under the name Belgrade Marathon – Sports Forum, which featured three panels: Organization of large sports and athletic events, PR and communication in sports, and Health and sports.